China’s legislature has approved a proposal to impose a highly contentious national security law in Hong Kong, in an unprecedented move that critics say threatens fundamental political freedoms and civil liberties in the semi-autonomous territory.

The country’s rubber-stamp parliament, the National People’s Congress (NPC), nearly unanimously approved the resolution Thursday to introduce the sweeping security legislation, which bans secession, subversion of state power, terrorism, foreign intervention and allows mainland China’s state security agencies to operate in the city.
Only one delegate voted against the proposal, while 2,878 voted for and six abstained.
The law will drastically broaden Beijing’s power over Hong Kong, which last year was roiled by anti-government protests calling for greater democracy and more autonomy from mainland China.
Now approved, the NPC’s standing committee will draft the law — a process that is expected to take about two months. It will then be implemented upon promulgation by the Hong Kong government, bypassing the city’s legislature via a rarely-enacted constitutional backdoor. 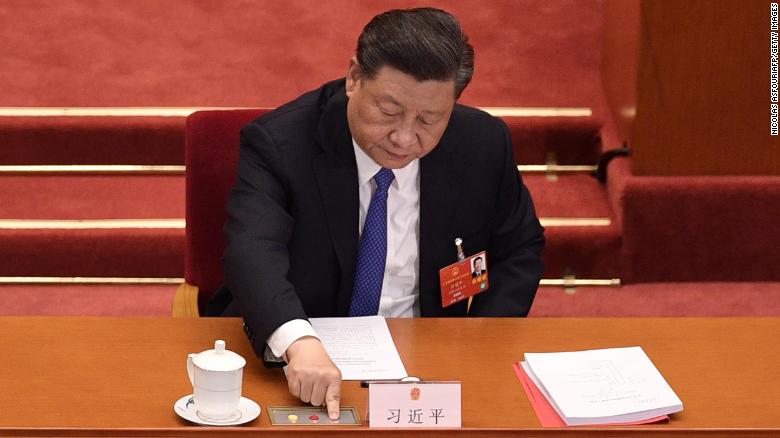 Chinese President Xi Jinping votes on a proposal to draft a security law on Hong Kong during the closing session of the National People’s Congress at the Great Hall of the People in Beijing on May 28, 2020.
News of the proposal last week was met with immediate resistance in the city, with protesters taking to the streets and clashing with police. The approval of the law is expected to result in further mass demonstrations, with protest leaders vowing to oppose greater Chinese government influence whatever the cost.
China’s Premier Li Keqiang said Thursday after the parliamentary meetings that the law was designed for the “steady implementation of ‘one country, two systems'” — a formula that guarantees Hong Kong its autonomy and freedoms — and for “Hong Kong’s long term prosperity and stability.”
But that has failed to reassure critics. The movehas been denounced internationally, with opponents warning it could curtail many of the legal safeguards promised to the city when it was handed from British to Chinese rule in 1997. In mainland China, far reaching national security laws have been used to target pro-democracy campaigners, human rights activists, lawyers and journalists.
Hong Kong pro-democracy lawmaker Claudia Mo said the decision marks “the beginning of a sad and traumatizing era” for the city.
“They’ve practically taken away our soul. Our soul we’ve been treasuring all these years, the rule of law, human rights, they’re taking away all the core values we’ve come to know,” she said.
“From now on, Hong Kong is nothing but just another mainland Chinese city.”

Following protests in the city Wednesday in which around 300 people were arrested, US Secretary of State Mike Pompeo said that his country would no longer consider the global financial hub as autonomous from China for trade and economic purposes.
In a statement, Pompeo denounced the law as a “disastrous decision” and “the latest in a series of actions that fundamentally undermine Hong Kong’s autonomy and freedoms.”
“No reasonable person can assert today that Hong Kong maintains a high degree of autonomy from China, given facts on the ground,” said Pompeo.
Under the Hong Kong Human Rights and Democracy Act passed last year in support of Hong Kong’s months-long pro-democracy protests, the US government must annually verify to Congress that the city remains autonomous from China, or risks losing its special status with the US.
Hong Kong’s special trade and economic status with the US exempts it from the tariffs and export controls imposed by Washington on mainland China.
It is not immediately clear what repercussions Pompeo’s announcement will bring. Hong Kong has long served as a regional hub for many international businesses, as well as a springboard for Chinese companies to expand internationally.
The US Consulate General in Hong Kong says it represents more than 1,200 US companies doing business there — more than 800 are either regional offices or headquarters.
A congressional aide told our reporters that the certification does not automatically trigger action and the next steps will be determined by US President Donald Trump.
David Stilwell, the top US diplomat in the Bureau of East Asian and Pacific Affairs, said officials were looking at options “across the spectrum,” including visa or economic sanctions.
US experts say the fallout could potentially be much wider, such as bringing an end to the extradition treaty between US and Hong Kong. 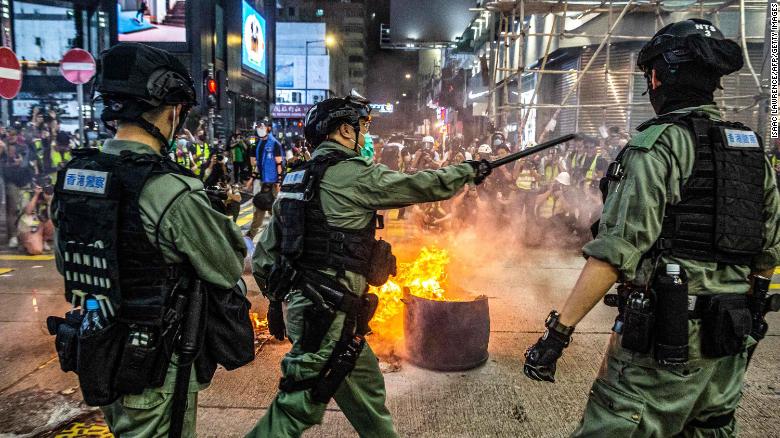 Police stand guard on a road to deter pro-democracy protesters from blocking roads in the Mong Kok district of Hong Kong on May 27, 2020.

The US announcement is likely to infuriate Beijing and further strain relations between the two sides, following disputes over the coronavirus pandemic and a prolonged trade war.
The Chinese government has yet to respond to Pompeo’s statement, which was released after midnight Beijing time. But the country’s foreign ministry earlier vowed to hit back at any “external intervention.”
“The legislation on upholding national security in Hong Kong is purely China’s internal affair that allows no foreign interference,” ministry spokesperson Zhao Lijian said on Wednesday when asked about a possible strong response from Washington to the law.
“In response to the erroneous practices of external intervention, we will take necessary countermeasures,” Zhao said.
The chief editor of the Global Times, a government-controlled nationalist tabloid, lashed out at Washington on Thursday, accusing it of being “too narcissistic” in thinking that it could “grasp Hong Kong’s fate in its hand.” 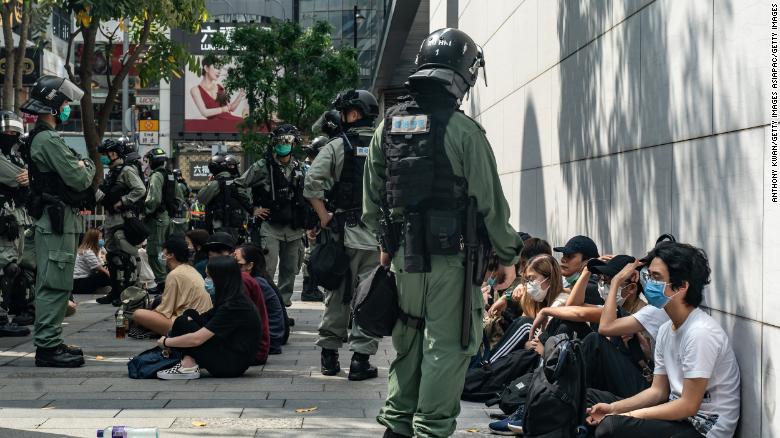 Riot police mass detain pro-democracy protesters during a rally in Causeway Bay district on May 27 in Hong Kong.
“The only card in American hands is Hong Kong’s special tariff status, and it has been thoroughly studied by the Chinese. If Washington wants to play this card, let it play it…Hong Kong is the source of the largest US trade surplus, with 85,000 US citizens living there. Let’s see how the US will swallow the bitter fruit of canceling Hong Kong’s special tariff status,” Hu Xijin wrote in a defiant post on Weibo.
According to the Hong Kong government, the US had a surplus of US$31.1 billion in merchandise trade over Hong Kong in 2018, the single economy with which the US has the highest trade surplus.
“The biggest pillar for Hong Kong to remain an international financial center is its special relations with the huge economy of the Chinese mainland…China’s strength dictates that there must be an international finance center on our coastline, and it will be where the Chinese people want it to be,” Hu said in the Weibo post.
Arab Observer
Tags
Arab Observer china China's foreign intervention global news International news latest international news latest news Parliament security law terrorism
Share
Facebook Twitter LinkedIn Share via Email Print