An image of a shirtless young protester in Gaza gripping a Palestinian flag with one hand and swinging a slingshot over his head with the other has drawn comparisons with the iconic French Revolution painting, Liberty Leading the People.

Captured on October 22 by Mustafa Hassouna of Turkey’s Anadolu Agency, the photo shows 20-year-old Palestinian A’ed Abu Amro seeming to rise out of the thick of a protest against the Israeli blockade.

He appears in sharp contrast to fellow demonstrators and reporters in protective jackets behind him, all set against a background of black smoke from burning tyres. The image has been tweeted over 5,000 times.

Abu Amro lives in the al-Zaytoun neighbourhood in Gaza City.

He protests every Friday and Monday with friends.

“I was surprised this picture of me went viral,” he told our reporters. “I participate in protests on a weekly basis, sometimes more. I didn’t even know there was a photographer near me.”

Amro said that his friends sent him the image – taken in Beit Lahiya in northern Gaza – the next day, having spotted it being shared on social media.

When a Michelangelo with a camera captures David fighting Goliath in action. 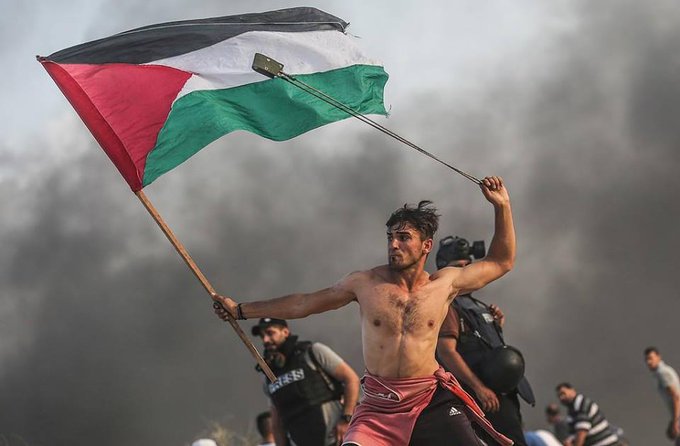 “I don’t go to protests to get pictures of me taken, but this has encouraged me to continue demonstrating,” he said.

“The flag I was carrying is the same one I always hold in all the other protests I’ve attended. My friends make fun of me, saying it is easier to throw rocks without holding a flag in the other hand, but I got used to it.

“If I get killed, I want to be wrapped in the same flag. We are demanding our right of return, and protesting for our dignity and the dignity of our future generation.”

For nearly seven months, Palestinians in the Gaza Strip have protested along the fence with Israel demanding their right to return to the homes and land their families were expelled from 70 years ago.

The protesters are also demanding an end to the crippling 11-year Israeli blockade of the enclave.

Since the Great March of Return demonstrations began on March 30, Israeli forces have killed at least 205 Palestinians in the besieged coastal enclave, including journalists and paramedics, and have injured more than 18,000.

Laleh Khalili, a SOAS University professor, shared the photo on Twitter on Tuesday, writing: “Holy sh** what an image. “13th attempt to break the Gaza blockade by sea”.”

She followed it up with a second tweet containing an image of Liberty Leading the People, painted by Eugene Delacroix commemorating the July Revolution of 1830, which toppled King Charles X of France.

In that iconic painting, a woman symbolising Liberty leads people over a barricade and dead bodies of the fallen, holding the Tricolore – the flag of the French Revolution, which became France’s flag.

Several users agreed with the comparison. 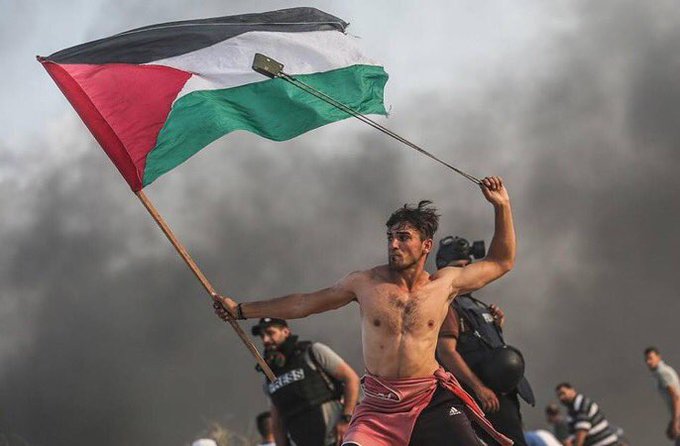 “Snapped on the way to storming the bastille,” joked Yousef Munayyer, of the US Campaign for Palestinian Rights.

snapped on the way to storming the bastille 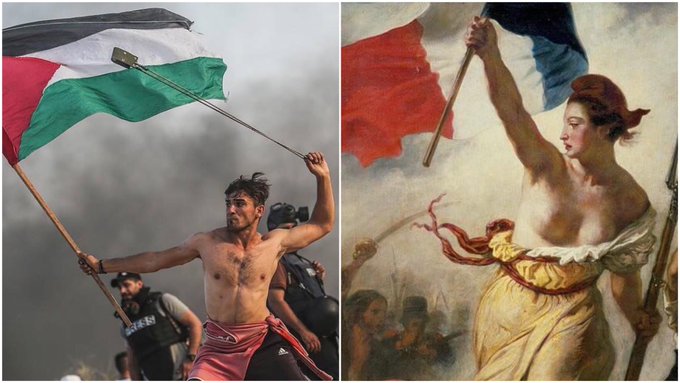 Others noted similarities with different paintings depicting the French Revolution, David vs Goliath and Poseidon, the Greek god of the sea who supports the Greeks against the Trojans in the Trojan War.