Russia’s President Vladimir Putin and his Kazakh counterpart Kassym-Jomart Tokayev on Saturday discussed restoring “order” in Kazakhstan following days of violence and unrest, as several high-profile officials were detained on suspicion of treason.

Tokayev told Putin the situation in his country was “progressing on the way to stabilization” and expressed his “appreciation” for the deployment of a Russia-led military bloc to Kazakhstan to try and control violence on the streets, the Kremlin said in a statement on Saturday.
Meanwhile, former head of Kazakhstan’s National Security Committee Karim Massimov and some other unnamed officials have been detained on suspicion of treason, the country’s National Security Committee announced, according to state media Khabar 24 on Saturday. 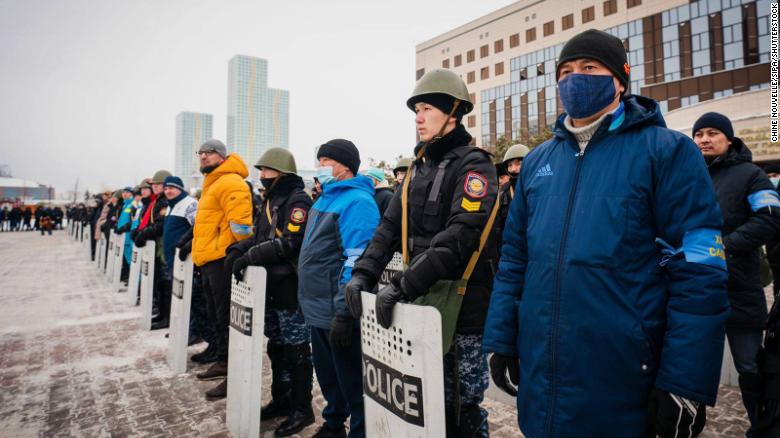 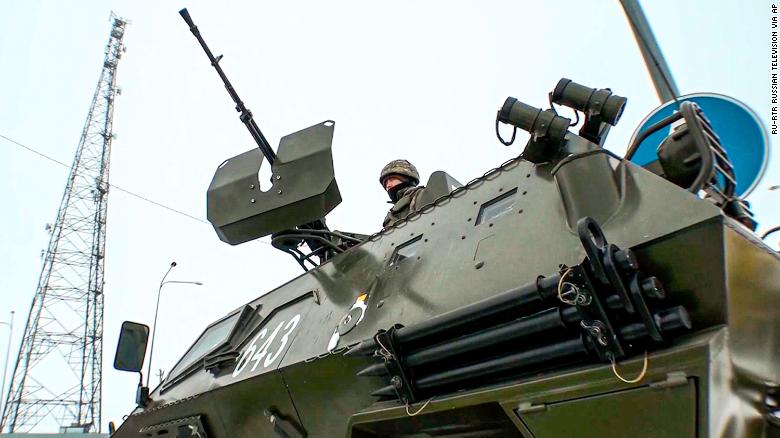 In this image taken from footage provided by Russian television, a Kazakh soldier stands atop of a military vehicle at a check point on Friday, January 7.
Violent protests in Kazakhstan in recent days have seen the government resign and the declaration of a state of emergency as troops from a Russia-led military alliance head to the Central Asian country to help quell the unrest. Dozens have been killed, hundreds injured and thousands of protesters detained.
It’s the biggest challenge yet to autocratic Tokayev’s rule, with initial public anger over a spike in fuel prices expanding to wider discontent with the government over corruption, living standards, poverty and unemployment in the oil-rich, former Soviet nation, human rights organizations report.
On January 5, protesters reportedly stormed the airport in the country’s biggest city, Almaty, forcibly entered government buildings, and set fire to the city’s main administration office, local media reported. There were also reports of deadly clashes with police and military, a nationwide internet blackout and buildings damaged in three major cities. 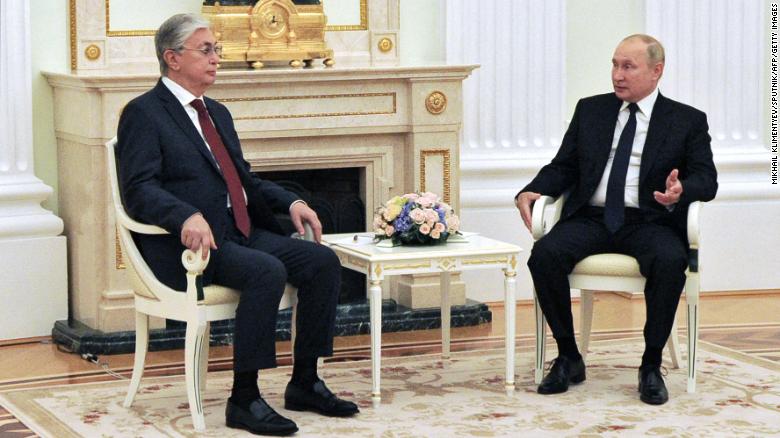 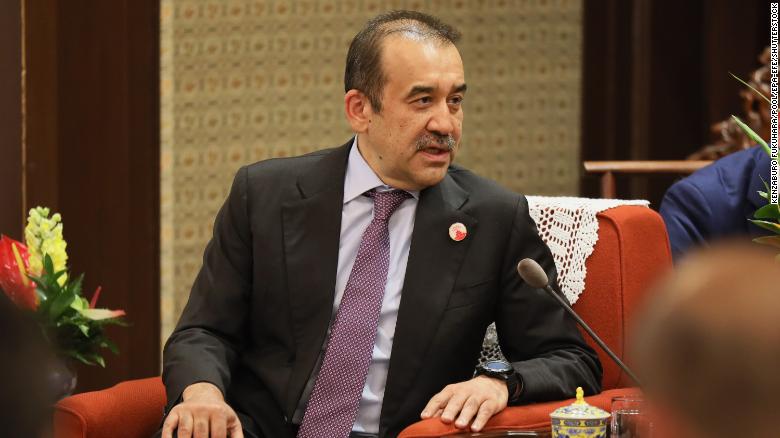 Karim Massimov, former chairman of the National Security Council of Kazakhstan pictured in Beijing, China, 2019.
The violence continued into the following day, with dozens of protesters killed and hundreds injured, according to an Almaty police official. Security forces reportedly fired on protesters and explosions were heard close to Republic Square in Almaty, Russian state news agency TASS reported.
Enter your email to sign up for CNN’s Arabic Breaking News newsletter alerts.
In a read-out of Tokayev’s call with Putin on Saturday, Tokayev reportedly told Putin that the situation in the country is stabilizing but “hotbeds of terrorist attacks persist. Therefore, the fight against terrorism will continue with all decisiveness.”

Tokayev declared January 10 a day of national mourning for the victims of violent protests, his press office announced Saturday.
As of January 7, a total of 18 law enforcement personnel had been killed in the violence and 748 injured, state television Khabar 24 reported, quoting the Interior Ministry. According to the state broadcaster, 26 “armed criminals” have been killed and 18 injured, and more than 3,000 protesters have been detained during unrest across the country.
The Kazakh president “signed an order declaring January 10, a day of national mourning in Kazakhstan in connection with the human victims as a result of the terrorist acts in the country,” the press office said on Twitter.
In a defiant public address, Tokayev claimed the unrest, which began earlier this week as protests against rising fuel prices, had been masterminded by well-trained “terrorist bandits” from both inside and outside the country. CNN has not corroborated any claims made by the government or president defending their use of violence and excessive force against the protesters.
It comes after the leader said Friday hehad ordered security forces to “kill without warning” to crush the violent protests that have paralyzed the former Soviet republic.

Kazakhstan’s former president Nursultan Nazarbayev remains in the country, his press secretary said on Twitter Saturday following rumors that he had left amid the violence.
His press secretary Aidos Ukibai said the longtime leader remains in the capital city, Nursultan, without offering evidence.
“The leader of the nation remains in the capital of Kazakhstan, Nur-Sultan city. We ask you not to disseminate false information. Leader of the nation is holding consultations and is direct line with the President Kassym-Jomart Tokayev,” Ukibai said. 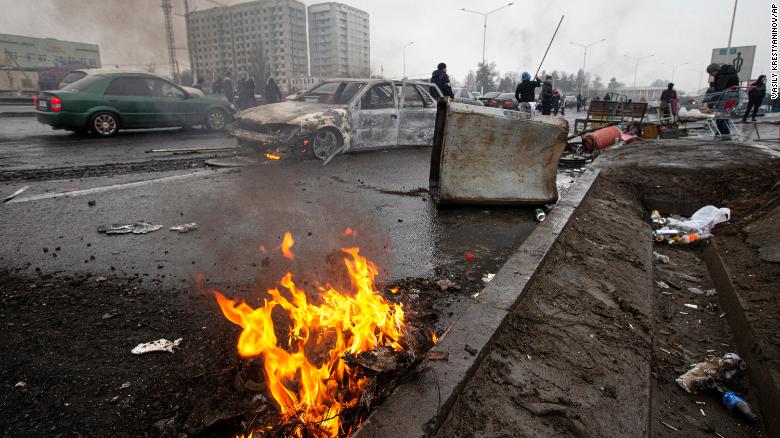 People walk past cars that were burned after clashes, on a street in Almaty, Kazakhstan on Friday, January 7.
Ukibai said Nazarbayev had held several phone calls with the leaders of countries friendly to Kazakhstan.
“The leader of the nation calls to unite around President of Kazakhstan to overcome current challenges and to ensure safety in the country,” he added.
It comes after Tokayev said in a televised address on Wednesday that he had taken over from Nazarbayev as head of the country’s Security Council.
Earlier this week a statue of Nazarbayev was torn down by protesters in the town of Taldykorgan, in the country’s southeast Almaty region.
Nazarbayev announced his resignation as president in March 2019, after nearly three decades in office. The former Communist Party official was the last of the leaders who were running the 15 Soviet republics when the USSR collapsed in 1991.
Prime Minister Askar Mamin resigned amid the protests. Alikhan Smailov was appointed acting prime minister, and members of the government will continue to serve until the formation of the new cabinet, according to a statement published on the presidential website Wednesday.
The country’s capital was named after him following his resignation.
Nazarbayev ran Kazakhstan as a typical autocrat: The State Department’s 2018 human rights report noted Kazakhstan’s 2015 presidential election, in which Nazarbayev received 98% of votes cast, “was marked by irregularities and lacked genuine political competition.”
Arab Observer
 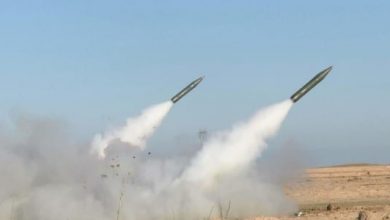 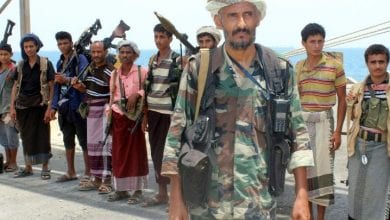 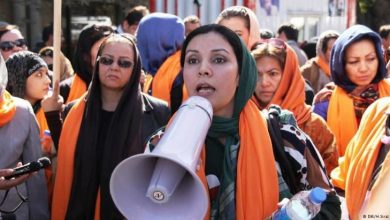