French President Emmanuel Macron said Monday there was a “real opportunity” for peace in Ukraine following the election of Ukrainian President Volodymyr Zelensky.

“There is a real opportunity to put an end to the conflict that has been going on for five years,” Macron said at the start of talks with Russian President Vladimir Putin who voiced “cautious optimism” about Zelensky.

The Russian and French leaders met at Brégançon — a medieval fort on an island in the Mediterranean that serves as the French president’s summer holiday retreat — with the conflict in Ukraine set to be one of the main issues during their discussions.

Macron said he hoped to attend a four-way summit with the leaders of Ukraine, Russia and Germany — the so-called Normandy format — “in the next few weeks” to try to end the fighting which began in 2014.

Despite cautious optimism, Ukraine peace ‘will not be a speedy process’, says our reporter Nick Holdsworth in Moscow

The European Union has imposed several rounds of sanctions on Russia after it seized Ukraine’s Black Sea peninsula of Crimea, an annexation the international community deemed illegal.

It sparked a war in eastern Ukraine between government forces and Russian-backed separatists which has so far claimed the lives of more than 13,000 people.

An ‘irritant’ to relations

“Relations between Russia and the European Union have an irritant, a subject of disagreement, which is Ukraine, which is a problem we have to resolve,” Macron told the Russian leader.

“We need to keep up our pressure, our energy to resolve this problem,” he added.

Putin said: “I will talk (with Macron) about my discussions with the new Ukraine president. There are things that are worth talking about and that give grounds for cautious optimism.”

Zelensky has offered to meet Putin for face-to-face talks and is known to have spoken to him by phone in recent weeks.

“President Zelensky has made offers to which — it seems to us — President Putin should respond in an encouraging way,” a French official said ahead of the meeting between the leaders on condition of anonymity.

Speaking shortly after welcoming Putin, Macron also said the two leaders would discuss how to de-escalate tensions over Iran, the Syria conflict and arms control issues.

The French leader expressed “profound worry” over the bombing of the Syrian town of Idlib, telling Putin that it was “urgent” that a ceasefire come into force.

“I must express our profound worry about the situation in Idlib. The population in Idlib is living under bombs, children are being killed. It’s vital that the ceasefire agreed in Sochi is put into practice,” he told Putin.

Macron also called for the respect of free speech and free elections in Russia.

Moscow has been rocked by weekly protests for more than a month after the authorities barred opposition candidates from running in an election for the city’s legislature in September.

Macron is hosting Putin just days before welcoming world leaders including US President Donald Trump for the August 24-26 Group of Seven (G7) summit in Biarritz on France’s Atlantic Coast. 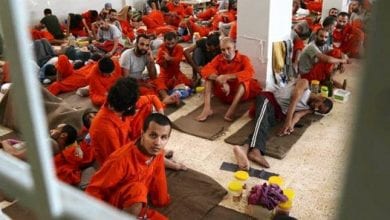 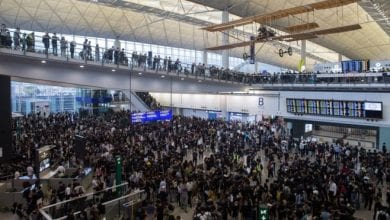