Some seven weeks since the 2019-20 season finished, a new Premier League campaign gets under way on Saturday – with 380 matches over the next eight months.

On the same day, Liverpool begin their title defence at home to Leeds United – back in England’s top flight for the first time since 2004 – at 17:30.

The season starts as it ended in July – behind closed doors – while all 28 Premier League fixtures in September will be televised live.

The campaign will finish on 23 May 2021, fewer than three weeks before the start of Euro 2020, which has been put back a year until 2021 because of the coronavirus pandemic.

On the eve of the 2020-21 campaign, BBC Sport takes a look at the big new Premier League signings to look out for. Will Liverpool mount a successful title defence? And will the three promoted clubs stay up?

There are four games spread out across the opening day of the season, each kicking off at a different time.

After the London derby at Craven Cottage, Crystal Palace host Southampton at 15:00 before the focus switches to Anfield.

Then it is back to the capital at 20:00 for West Ham’s home match with Newcastle.

On Sunday, newly promoted West Brom are at home to Leicester (14:00), while Everton and their new signings visit Tottenham at 16:30.

There are two fixtures on Monday. Sheffield United host Wolves at 18:00 – less than five weeks after Nuno Espirito Santo’s side were knocked out of the Europa League quarter-finals – and big-spending Chelsea, who were in Champions League action as recently as 8 August, are at Brighton (20:15).

The Burnley-Manchester United and Manchester City-Aston Villa games have been postponed.

Both Manchester clubs have been allowed delayed starts. City were in competitive action as recently as 15 August, when they lost 3-1 to Lyon in the Champions League quarter-finals.

United were beaten 2-1 by Sevilla in the semi-finals of the Europa League on 16 August.

Will the short turnaround impact sides?

Even before the end of last season, the Premier League announced the new campaign would start on 12 September.

The short turnaround coupled with the pandemic means teams used to preparing for the season with tours around the world in front of their global fanbase have stayed closer to home.

Liverpool visited the United States, Scotland and Switzerland before their title-winning campaign. This time they have played two matches in Austria and entertained League One Blackpool at a near-empty Anfield.

Arsenal played League One MK Dons before beating Liverpool on penalties in the Charity Shield at Wembley on 29 August.

Sheffield United’s preparations for their second successive season in the top flight were disrupted by the weather.

On 25 August, they were leading 1-0 at Dundee United when the match was abandoned at half-time because of a waterlogged pitch and high winds.

Who are the big new signings?

It has been a busy close season for Chelsea boss Frank Lampard.

The Blues have spent about £200m on six major signings, with two of them free, making them by far the most active Premier League team in the transfer window.

Their purchases include attacking midfielder Kai Havertz from Bayer Leverkusen in a deal worth about £71m.

All 20 Premier League clubs have made signings, although some have been less busy than others.

Liverpool have made only one addition to their squad – Greece left-back Kostas Tsimikas for 13m euros (£11.7m) from Olympiakos.

In normal circumstances, the summer transfer window would be closed by now, but it has been extended to 5 October because of the pandemic.

The winter window will run throughout January 2021 as usual.

The Reds were spectacular on their way to a first league triumph for 30 years, but they face a new challenge as City look to wrestle back the crown after being denied a third successive league title.

While City, Chelsea, Manchester United and Arsenal have all made significant additions to their squads, Jurgen Klopp has yet to make a major signing. Will depth be an issue?

Having secured fourth spot last season, Chelsea will look to push on after spending so much money when others are tightening their belts, and what of United and Arsenal?

United enjoyed a solid second half to last season following the arrival of Bruno Fernandes. Will they kick on after strengthening the midfield with Donny van de Beek?

After his side beat Manchester City and Chelsea on the way to lifting the FA Cup, Arsenal boss Mikel Arteta will have his eye on more trophies. 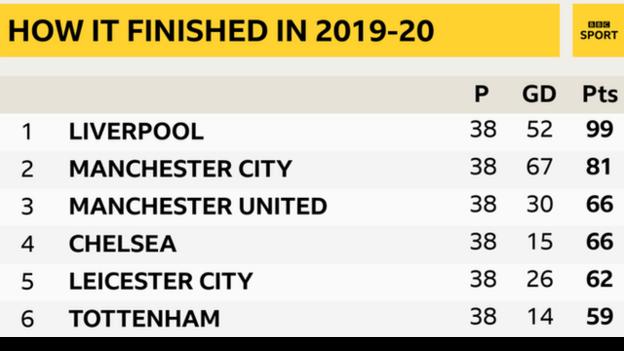 Everton, without a major trophy since 1995, will seek to significantly improve on last season’s 12th-placed finish, particularly as they have been busy in the transfer market.

Tottenham and Leicester will also be eyeing a Champions League spot after finishing fifth and sixth last season respectively, while Wolves, who have spent a club-record £35.6m on 18-year-old striker Fabio Silva, are seeking a third successive top-seven finish.

Will the new teams survive?

The Premier League said goodbye to Norwich City, Watford and Bournemouth at the end of last season – and welcomed Leeds, West Brom and Fulham.

Their head coach Marcelo Bielsa is only the fourth Argentine to manage in the English top flight, after Ossie Ardiles (Tottenham), Mauricio Pochettino (Southampton, Tottenham) and Mauricio Pellegrino (Southampton).

Aged 65 years and 53 days, he will be the second-oldest permanent manager (post-war) to take charge of his first game in the English top flight behind only Dutchman Dick Advocaat, who was 67 when he took charge of Sunderland in March 2015.

West Brom are in the Premier League for the first time since 2017-18, when they finished bottom of the table after eight successive seasons in the top flight.

The Baggies will play Black Country rivals Wolves in the Premier League for the first time since 2012.

Fulham beat Brentford in the play-off final at Wembley on 4 August to secure a return to the top fight after being relegated in 2018-19.