Turkish Defense Minister, Khulusi Akar: While Ankara continues to support the Libyan reconciliation forces militarily with various types of weapons and foreign fighters, politically and diplomatically, he confirmed on Wednesday that his country enters the heart of the scales in Libya.

Akar said in statements from the headquarters of the Ministry of Defense carried by the “Anatolia” news agency that “the balances in Libya started to change after the advisory services and training provided by the Turkish army to the Al-Saraj government forces,” after Al-Wefaq forces seized the Al-Watiyah airbase in the west of the country.

This base is one of the most important and largest Libyan air bases, with an area of ​​about 50 square kilometers, and includes a huge heavily fortified military structure, established by the United States in the 1940s, and is characterized by an important strategic location near the Tunisian and Algerian borders as well as the Mediterranean, and allows the implementation of operations Air combat is not only in the capital city of Tripoli, but in the entire western region and even central Libya.

This is announced by the reconciliation forces Control over the base of the Watiyah Air force located west of the capital Tripoli and near the Tunisian border, considering this a field gain, but the Libyan army played down this importance militarily, where the spokesman for the General Command of the Libyan Army, Ahmed Al-Mismari, confirmed on Tuesday that the army will return to the Al-Wattia air base, explaining that this The withdrawal was tactical and programmed for months. 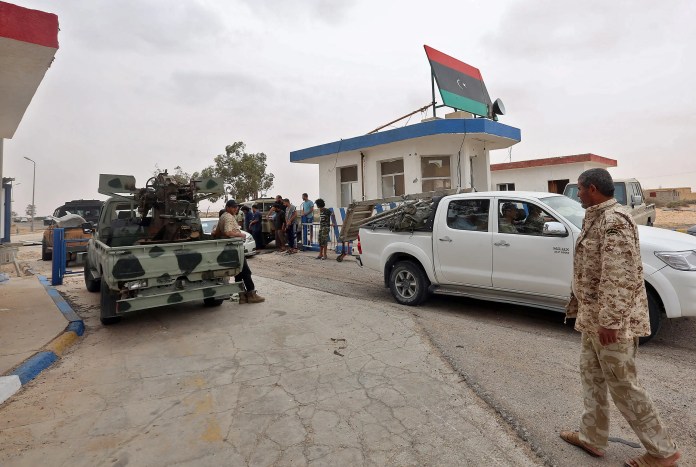 Elements of Al-Wefaq at the base of al-Watiyah

This, and analysts have confirmed that Turkey’s intervention in Tripoli favored reconciliation, as political analyst Abu Arab al-Baraki considered in a statement to “Al-Arabiya.net” that Turkish military efforts are what Tipped the balance in favor of the reconciliation forcesHe pointed out that it is not considered who entered al-Wattia air base to be forces affiliated with Al-Wefaq, but rather, Turkey, in a public and clear manner.

He also added that Turkey would put its hand on the brigade and turn it into a permanent military base in Libya in the event that the army did not prepare it, for several goals that President Recep Tayyip Erdogan is planning, including besieging Europe, and trying to influence politics in Tunisia and Algeria, especially since this base lies its strategic importance in Being on the border in more than one side, pointing out that Erdogan, by taking possession of the country and the cities of the Libyan West, will have a great opportunity to impose himself on the East Mediterranean gas map, especially as the Libyan gas corridors are moving in the same direction that he entered today.

Ankara had signed a controversial agreement at the end of last November with the Al-Wefaq government to demarcate the maritime borders, allowing Ankara to acquire marine areas and benefit from energy resources, and since then it has worked to help the Al-Wefaq government to stay in power and establish its existence, through its military support of various types Weapons and foreign fighters, politically and diplomatically.