When the conflict between Russia and Ukraine began in February, the idea that the Iranian regime could play a critical role in the war was inconceivable to some people. But the Islamic Republic has gradually escalated its involvement in the conflict.

Later, in the first instance of military cooperation between Moscow and Tehran during the conflict, the theocratic establishment in Iran began supplying kamikaze drones to Russia. This led to the Ukrainian foreign ministry stripping the Iranian ambassador in Kyiv of his accreditation and reducing the embassy’s diplomatic staff, according to the Ukrainian Foreign Ministry.

The Islamic Republic recently threatened Ukrainian President Volodymyr Zelensky, in response to his speech at the US Congress this month during which he accused Tehran of supplying weapons to Russia. Iranian Foreign Ministry spokesperson Nasser Kanaani said, in a statement published on the Iranian regime’s official ministry website: “Mr. Zelensky had better know that Iran’s strategic patience over such unfounded accusations is not endless.” He added that Ukraine’s president should “draw a lesson from the fate of some other political leaders who contented themselves with the US support.”

However, the evidence that the Iranian regime is delivering weapons to Russia, and therefore adding fuel to the conflict’s fire, is overwhelming. The EU has concluded that Tehran is indeed “provid(ing) military support for Russia’s unprovoked and unjustified war of aggression against Ukraine” in the form of the “development and delivery of unmanned aerial vehicles to Russia.”

As its involvement escalated to the next level, the Islamic Republic began to dispatch troops to Crimea to assist Russia in its attacks on Ukraine’s infrastructure and civilian population, and to enhance the effectiveness of the suicide drones.

US National Security Council spokesperson John Kirby said that “the Iranians decided to move in some trainers and some technical support to help the Russians use them (the drones) with better lethality.”

The Iranian regime is increasing its involvement in the conflict between Russia and Ukraine.

But how does the Islamic Republic benefit from its involvement in the conflict between Russia and Ukraine? First of all, after being hit by draconian international financial sanctions, Tehran is seeking partners with which it can increase trade and skirt the US-led sanctions.

According to the latest report from Bloomberg, Tehran and Moscow are establishing a new transcontinental trade route, stretching about 3,000 kilometers from Europe to the Indian Ocean, which is “beyond the reach of any foreign intervention.”

The report adds: “The two countries are spending billions of dollars to speed up delivery of cargos along rivers and railways linked by the Caspian Sea. Ship-tracking data compiled by Bloomberg show dozens of Russian and Iranian vessels — including some that are subject to sanctions — already plying the route.”

Militarily speaking, there is an opportunity for the Iranian regime to learn from failures of its drones during the Russia-Ukraine war, and use the information it gains to further perfect its drone technology and ballistic missile program. In addition, the Islamic Republic will most likely ask Russia to supply it with advanced military technology in return for Tehran’s support.

As British Defense Minister Ben Wallace told the UK parliament this month: “Iran has become one of Russia’s top military backers … In return for having supplied more than 300 kamikaze drones, Russia now intends to provide Iran with advanced military components, undermining both Middle East and international security — we must expose that deal. In fact, I have, just now.”

Thirdly, by supplying weapons to a global power such as Russia, the regime in Tehran is asserting itself on the world stage as a major state player with significant military power.

Finally, it is not unrealistic to assume the Iranian regime will seek Russian assistance to advance its nuclear program. Moscow and Tehran previously worked together to construct several nuclear reactors in Iran and advance the regime’s nuclear technology. It has become increasingly clear that the Islamic Republic is rushing to cross the nuclear threshold and become a nuclear-armed state.

As Zelensky has correctly warned: “I have a question for you: How does Russia pay Iran for this, in your opinion? Is Iran just interested in money? Probably not money at all but Russian assistance to the Iranian nuclear program. Probably, this is exactly the meaning of their alliance.”

The Iranian regime is increasing its involvement in the conflict between Russia and Ukraine. By adding fuel to the fire, Iran’s leaders are attempting to benefit themselves, economically and militarily. 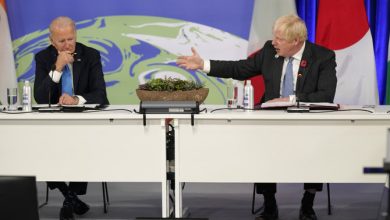 Iraq gets deeper and deeper into a political quagmire Europe lacks a captain for its drifting ship of state