For an army given to masking its moves, surely the worst way to disguise a potential imminent invasion of a country is by overtly preparing for it.

This is the paradox around Russia’s visible buildup in its west, not far from the Ukrainian border. Were Moscow trying to reverse the military stalemate around the Donbas separatist region — that it truncated from Ukraine in 2014 — would it want to telegraph its moves so blatantly?
Russia’s signals are obvious. Relentless social media videos show armored convoys moving towards the general border area. These led to open-source intelligence sleuths @CITeam_en spotting a congregation of likely hundreds of vehicles not far from the Russian city of Voronezh. That is still over 100 miles from Ukraine, but it is a sizeable buildup that was captured on satellite images from the Maxar technology group. 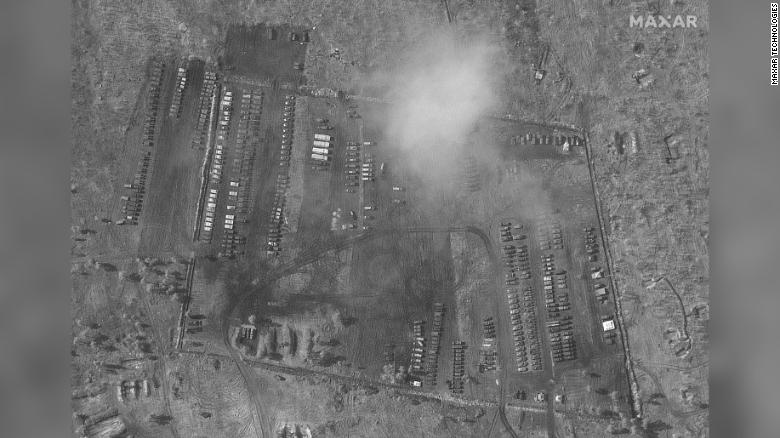 A buildup of vehicles at the Pogonovo training area, seen in Maxar’s satellite image.
The White House said this week that Russia now has more troops near the Ukraine border than any time since 2014 — when the peninsula of Crimea was annexed. Further south, military intelligence reports have assessed that some 4,000 heavily armed Russian forces had been seen moving in Crimea, a US defense official told our reporters.
Moscow is also talking the game. Russian defense minister Sergei Shoigu has announced snap readiness inspections for the army. The Kremlin’s envoy to the conflict, deputy head of the presidential administration Dmitri Kozak, said that Moscow would, as has pretty much always been implied, come to the defense of Ukraine’s eastern population if needed. And he said the start of a conflict would be the “beginning of the end of Ukraine.” Russia’s declarations are pretty noisy.
For Ukraine’s part, President Volodymyr Zelensky has moved some units closer to the Donbas, and took a very high-profile trip to the area Thursday. Like Russian leader Vladimir Putin, Zelensky’s domestic ratings are not that healthy. He talked the language of peace. He tried to be close to the troops, aware that US President Joe Biden has said he will stand by him. 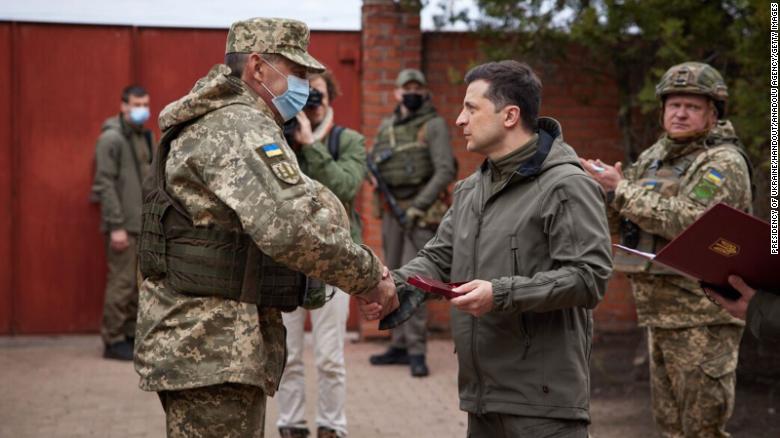 Ukrainian President Volodymyr Zelensky (right) handshakes with a soldier during his visit to a front in Donbas, Ukraine on April 08.
The White House has said it is “increasingly concerned by recent escalating Russian aggressions in eastern Ukraine” and US officials have also hinted they might send warships to the Black Sea, a signal of increased involvement, even though American aircraft have regularly been monitoring that area. German Chancellor Angela Merkel asked Putin to pull his forces back during a call on Thursday. Everyone is getting very excitable, very fast.
Speculation about what comes next in the biggest land war in Europe in two decades is as rife as the Kremlin surely hope it would be. Meanwhile, its sole cost so far is the fuel bill of moving a lot of tanks around.
The key as-yet-unanswered question is what Russia’s objective would be in a military intervention. Some analysts have speculated it might flood the separatist areas and adjacent conflict zones with a huge Russian “peacekeeping” force, designed to impose its will and rules on the area — effectively annexing the Donbas in earnest.
Yet this would almost guarantee a Western response, likely at first in the form of sanctions. It would also achieve for Moscow essentially the same control it has now on these areas, albeit with lot of expensive Russian skin and hardware in the game. It is all the squeeze, with none of the juice, and so probably not that favorable to the Kremlin. 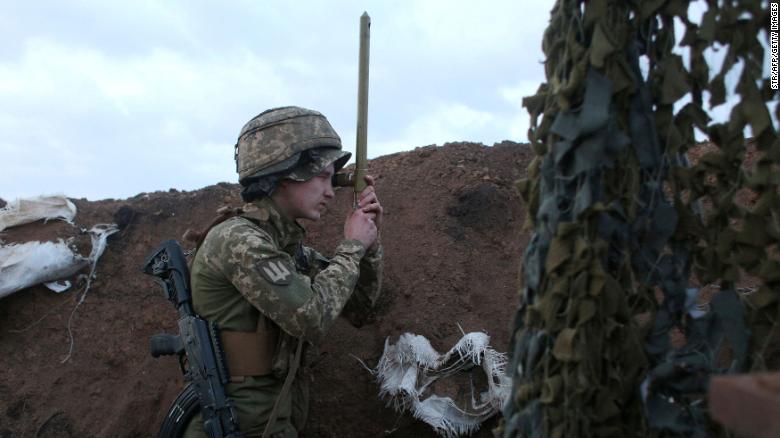 A Ukrainian serviceman uses a periscope in a trench on the frontline with Russia-backed separatists near the town of Zolote, in the Lugansk region on April 8.
But a land corridor — a strip running through the Ukrainian town of Mariupol and to the Armiansk area above Crimea — would also be extremely vulnerable for any occupying Russian forces. They would be caught between the Azov Sea and a very angry, better-equipped-than-before, Ukrainian army. To hold that corridor effectively, they would have to push deeper into Ukraine, and then face yet more resistance from the Ukrainian army and the local population. Long gone is the hope from 2014 that Russian soldiers would be seen as “liberators” from a corrupt Kiev government. Hostility is much more palpable.
The second option floated by analysts involves the creation of a land corridor between separatist Donbas in the east and Crimea, the annexed peninsula to the south of Ukraine. For years, water has been a scarce resource in Crimea, a crisis which a senior Ukrainian official warned me two years ago could reach a critical stage in the summer of 2019. It still persists, along with the broader challenge for Moscow of maintaining a passable standard of life in Crimea through sea supplies, and over a small, new bridge it has made across the Kerch Strait. It is not a sustainable state of affairs for Russia’s latest acquisition in the long term.
So the task ahead of the Russian army is either do so little that the inevitable Western sanctions seem imposed for minimal gain. Or do so much (way too much) that you have to occupy large swathes of Ukraine for years. It’s a mess both ways.
In Moscow’s eyes then, a perhaps much better option is to amass its forces, make loud noises about Ukraine’s desire for war, hint at diplomacy and use its heavy-metal-gloved-hand across the border to force a better, negotiated solution. This of course presumes the Kremlin head is always making the best decisions. Putin is also capable of overreach or folly. 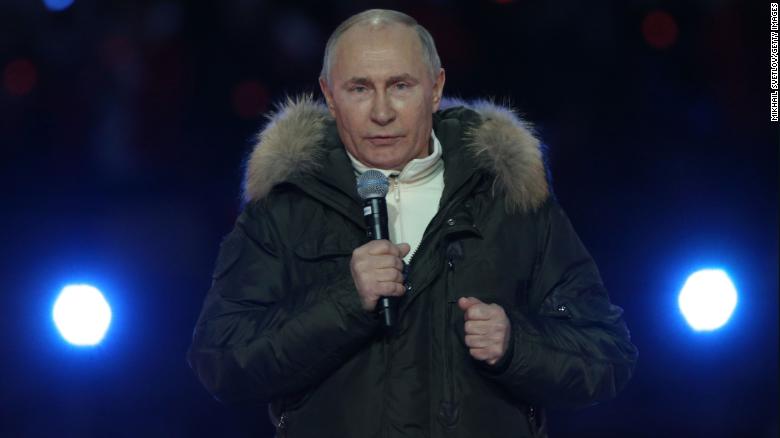 Russian President Vladimir Putin during a concert in Moscow marking the seventh anniversary of the Crimea annexation, on March 18.
Yet two enduring, unquantifiable risks remain. The first is that Putin may see, among all the chaos of the next few weeks, a moment of opportunity to strike, and simply decide to deal with the consequences later. The second is the inevitable peril of amassing angry forces on both sides of an already active front line. An unanticipated error or surge by either party could spiral into a bigger war.
A third invasion of Ukraine in 2021 is also a much more dangerous gamble for Putin than the one he took in 2014-15. US President Biden has made it clear he’ll offer “unwavering support” to Kiev. Washington’s mindset is irrevocably hardened to the idea that Russia is a threat. And Ukrainian leader Zelensky, as politically and militarily inexperienced as he is, will doubtless benefit domestically from being dragged into a conflict he hasn’t started.
If Moscow hopes its buildup means its phones start ringing more frequently, and diplomacy takes over, then it would better happen soon.
Arab Observer
 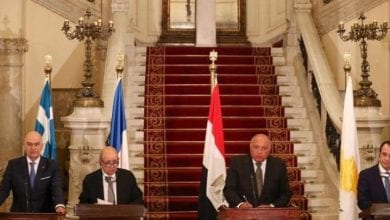 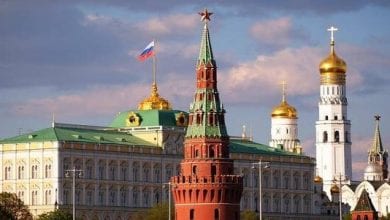 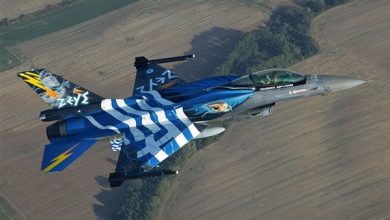 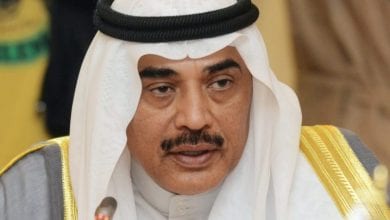