Dozens of terrified shoppers were evacuated from a Thai mall early Sunday (local time) as armed police said they had “taken control” of the ground floor of the complex from a gunman who killed at least 20 people.

But authorities did not give any firm details on the whereabouts of the attacker – a junior army officer identified as Sergeant-Major Jakrapanth Thomma.

There were fears the shooter in the Terminal 21 mall in the city of Nakhon Ratchasima, better known as Korat, could try to hide in the panicked crowd.

Police from the Crime Suppression Division urged fleeing shoppers to “raise their hands” and identify themselves on the ground floor “and authorities will evacuate you”.

Earlier Jakrapanth relayed his shooting spree through Facebook posts which charted the attack from army barracks in the city to the mall, where an unknown number of shoppers remained trapped.

Hospitals across the country braced for a grim night ahead.

“There are about 20 dead,” Kongcheep Tantravanich, a defense ministry spokesman said.

“Police, military commandos and sharpshooters are surrounding Terminal 21,” he said.

The bloodshed began Saturday afternoon when Jakrapanth shot three people — among them at least one soldier — at a nearby army barracks.

“He stole an army vehicle and drove into the town center,” police Lieutenant-Colonel Mongkol Kuptasiri.

There the gunman used weapons stolen from the army arsenal to bring carnage to a town center, walking into the Terminal 21 mall.

He “used a machine gun and shot innocent victims resulting in many injured and dead,” police spokesman Krissana Pattanacharoen said.

The Bangkok Post reported that the soldier killed in the attack was Thomma’s commander.

Nakhon Ratchasima is about 250 kilometers (155 miles) northeast of the Thai capital, Bangkok. It is a hub for Thailand’s relatively poorer and rural northeastern region. A Thai soldier, identified by authorities as Sergeant Major Jakapanth Thomma, opened fire in the city of Korat, Thailand including inside a mall, on February 8, 2020, killing at least 17 people. Screenshot from security footage

Pattanacharoen told AFP that authorities sealed off the shopping center in pursuit of the suspect, but have yet to capture the gunman. He is believed to be holed up in the mall.

Pls help pray for thailand this is dangerous situations in there Everyone in thailand if you are in that area, stay safe and be careful #กราดยิงโคราช 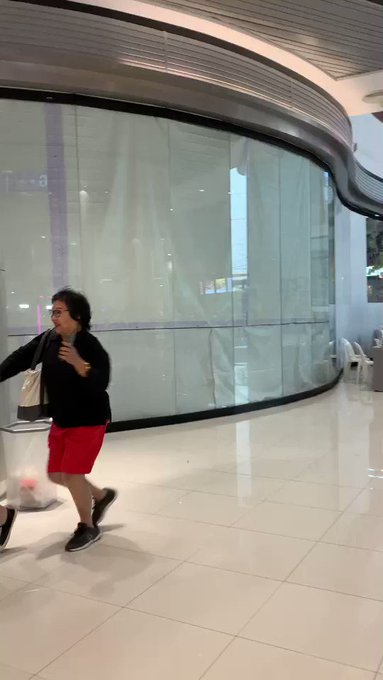 The size of the mall could pose a challenge for security forces as they try to capture the gunman. It consists of seven main retail floors, including one below ground level, and scores of shops and restaurants. It also houses a movie theater on the top floor.

Many malls in Thailand, including Terminal 21’s namesake in Bangkok, have metal detectors and security cameras at entrances manned by uniformed but unarmed security guards. Checks on those entering are often cursory at best. Thai soldiers and paramedics gather outside the Terminal 21 shopping mall where a mass shooting took place in the northeastern Thai city of Nakhon Ratchasima, on February 9, 2020. (Lillian SUWANRUMPHA / AFP)

The gunman posted photos and video of himself in full tactical gear as the attack was carried out.

In one Facebook update during the rampage, he wrote “No one can escape death” and “Should I give up?” In a later post, he wrote, “I have stopped already.” A Thai soldier who opened fire in a mass shooting on Saturday, February 8, 2020 in Korat, Thailand, killing at least 17, was identified as Sergeant Major Jakapanth Thomma. Photo: Thomma’s Facebook page via local media

His profile picture shows him in a mask and dressed in military-style fatigues and armed with a pistol. The background image is of a handgun and bullets.

In a photo circulated on social media that appeared to be taken from his Facebook page, the suspect can be seen wearing a green camouflaged military helmet while a fireball and black smoke rage behind him. The Facebook page was made inaccessible after the shooting began.

In a Facebook video, since deleted, the assailant, wearing an army helmet, filmed from an open jeep saying, “I’m tired… I can’t pull my finger anymore” and making a trigger symbol with his hand. There were also photos of a man in a ski mask holding up a pistol.

“Our hearts go out to the victims, their families and the community affected by this tragedy in Thailand. There is no place on Facebook for people who commit this kind of atrocity, nor do we allow people to praise or support this attack,” a Facebook representative said in a statement cited by Reuters.

Video and photos circulating online showed panicked scenes, with people fleeing and what appeared to be the sound of automatic gunfire filling the air.

The incident came just a month after another high-profile mall shooting, in the central Thai city of Lopburi. In that case, a masked gunman carrying a handgun with a silencer killed three people, including a 2-year-old boy, and wounded four others as he robbed a jewelry store. A suspect, a school director, was arrested less than two weeks later and reportedly confessed, saying he did not mean to shoot anyone.

Thailand has one of the highest rates of gun ownership in the world but mass shootings by soldiers targeting civilians are rare.

In one high-profile case, two lawyers were shot dead by a clerk at a court in the east of the country during a hearing over a land dispute.