Staring down the prospect of an extended stalemate in Ukraine, the US and its allies are placing a renewed emphasis on the need for a negotiated settlement to end the war as the conflict grinds into its 100th day with no clear victory in sight for either side.

US officials have in recent weeks been meeting regularly with their British and European counterparts to discuss potential frameworks for a ceasefire and for ending the war through a negotiated settlement, multiple sources familiar with the talks told our reporters.
Among the topics has been a four-point framework proposed by Italy late last month. That framework involves Ukraine committing to neutrality with regard to NATO in exchange for some security guarantees, and negotiations between Ukraine and Russia on the future of Crimea and the Donbas region.
Ukraine is not directly involved in those discussions, despite the US commitment to “nothing about Ukraine without Ukraine.” US and Ukrainian officials said the US has not been pressuring Ukraine to commit to a certain plan or directly pushing them to sit down with the Russians.
Still, there is some confusion about what kind of framework the US would consider appropriate to bring to the Ukrainians for further discussion.
US Ambassador to the UN Linda Thomas Greenfield told reporters earlier this week that the Italian framework is “one of those initiatives that we certainly would love to see bring a conclusion to this horrific war and the horrific attacks on the Ukrainian people.” But two US officials told CNN that the US actually does not support the Italian proposal.
In any case, US and western officials tell our reporters that there is a growing concern that if the Russians and Ukrainians don’t get back to the table and work out a deal, the war will drag on — potentially for years.

It’s not clear whether these discussions will translate into eventual settlement talks. The Biden administration still sees no real prospect for any diplomatic breakthroughs or ceasefires anytime soon and two NATO officials said that the western alliance sees little appetite to negotiate on the Ukrainian side — in part because Russia’s brutal bombing campaign and myriad human rights violations have destroyed public support for any concession to Russia. 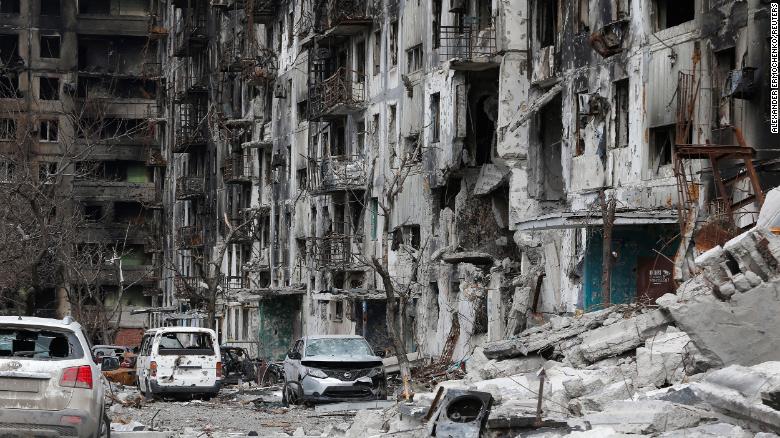 A view shows an apartment building destroyed during Ukraine-Russia conflict in the besieged southern port city of Mariupol, Ukraine April 3, 2022.
Moscow has also showed little interest in serious talks, officials say. Right now, Ukraine remains focused on ensuring a decisive military victory in the east and the south in order to put themselves in a superior negotiating position, these sources said.
“We can propose all the plans we want, but unlikely Kyiv will go for anything that cedes territory at the moment,” according to one official.
The concern that the conflict could grind on indefinitely — with mounting costs — has been reflected in the subtle shift in language and messaging by US officials over the past several weeks.
In April, the US’ stated goal was for Russia to “fail,” a National Security Council spokesperson said at the time, and for the Russian military to be significantly “weakened” in the long term, as Defense Secretary Lloyd Austin proclaimed — comments that reflected optimism that Ukraine might be able to defeat Russia decisively on the battlefield after successfully defending Kyiv.
But as an effective stalemate has taken hold on the battlefield, with Russia making incremental gains in the east and Ukraine saying it is increasingly outgunned and outmanned, senior Western officials — including US President Joe Biden — are emphasizing anew that even with advanced western weaponry, Ukraine’s prospects for peace will ultimately rest on diplomacy.
“As President Volodymyr Zelensky of Ukraine has said, ultimately this war ‘will only definitively end through diplomacy,'” Biden wrote in a New York Times op-ed on Tuesday. “Every negotiation reflects the facts on the ground. We have moved quickly to send Ukraine a significant amount of weaponry and ammunition so it can fight on the battlefield and be in the strongest possible position at the negotiating table.”
The hope, officials said, is that the US can support Ukraine long enough to see it through to a peaceful settlement rather than a full capitulation.
“Wars are unpredictable,” NATO Secretary General Jens Stoltenberg told reporters on Thursday. “We were able to predict the invasion, but how this war will evolve, it’s very hard to predict. What we do know is that almost all wars end at some stage at the negotiating table.”
But there are no indications yet that either Ukraine is giving up, or that Russian President Vladimir Putin will reverse what he’s doing inside Ukraine, one administration official told our reporters.
There are also no signs that Putin is willing to negotiate in good faith to end the war.
“We just don’t know” yet what might change Putin’s mind, the official added. 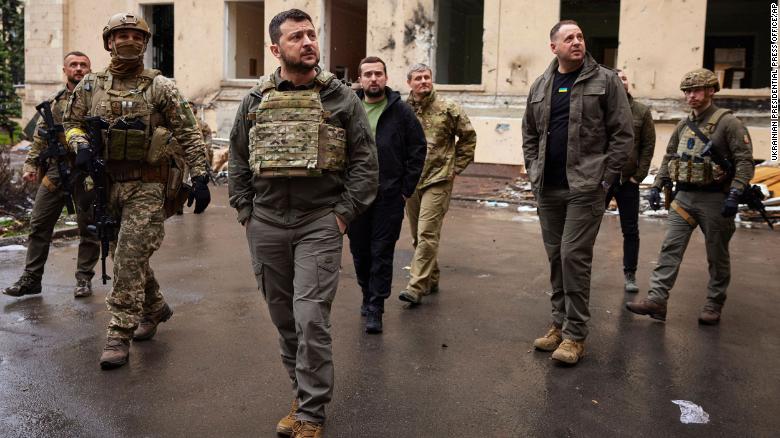 In this photo provided by the Ukrainian Presidential Press Office on Sunday, May 29, 2022, Ukrainian President Volodymyr Zelenskyy visits the war-hit Kharkiv region.
Officials have been careful to note that the US is not pushing for Ukraine to cede any territory to Russia, and have said from the beginning of the war that the US will avoid getting directly involved in any Russia-Ukraine negotiations. One source said that any pressure the US and the West places on Ukraine to negotiate will erode Kyiv’s leverage in future talks.
“It’s not for us to decide or to have strong opinions [on] what Ukraine should accept or not accept,” Stoltenberg said Thursday.
But some Ukrainian officials are still wary that the west will try to impose a deal on them, one Ukrainian source told CNN. Zelensky and his senior advisers have publicly ruled out making any territorial concessions to Russia.
“Those who advise Ukraine to give something to Russia, these ‘great geopolitical figures,’ never see ordinary people, ordinary Ukrainians, millions living on the territory they are proposing to exchange for an illusory peace,” he said in a video address late last month.

The war has settled into a grinding slog that intelligence and military officials believe will last many months, if not years. Although the two sides may trade small swathes of territory back and forth from day to day or week to week, multiple officials with access to the latest intelligence told our reporters that they do not expect either Russia or Ukraine to break through the existing battle lines anytime soon. 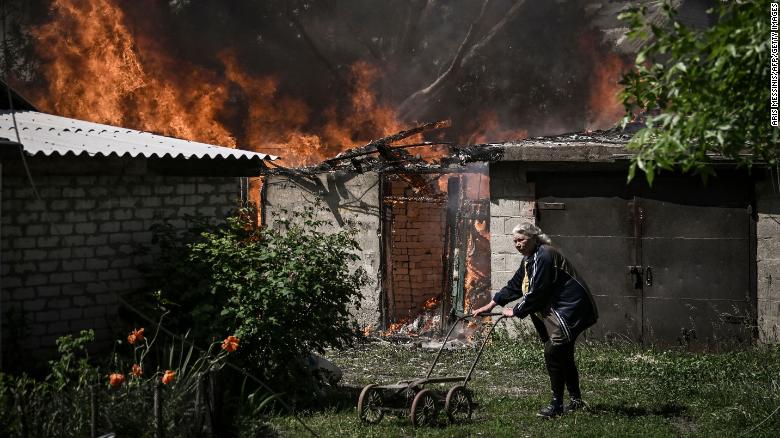 An elderly woman walks away from a burning house garage after shelling in the city of Lysytsansk at the eastern Ukrainian region of Donbas on May 30, 2022.
For now, that effective stalemate presents an opportunity for the US to slowly bleed Russia of both blood and treasure, multiple military officials said. But the longer the conflict drags on, the higher the costs for the West — and the greater the challenge the Biden administration will face in supplying Ukraine, finding sustainable replacements for Russian oil and gas, and keeping an already-fractious European alliance committed to its strategy.
The issue is particularly politically fraught heading into election season, with gas prices continuing to rise largely because of the measures the west has taken to cut off imports of Russian oil and gas.
That has led to some debate within the administration about how much further to go with sanctions.
Some officials are concerned that new tough moves — like imposing secondary sanctions on countries that don’t comply with US restrictions on Russian energy exports — could roil energy markets even further.
And there is a growing acknowledgement that sanctions will not be a “knock-out punch” to Russia, but rather a “stranglehold” that could take years to produce meaningful consequences, one senior official said.
As the US looks to maintain its military and financial support for Ukraine and isolate Russia for as long as it takes to get to a peace agreement, a key strategy will be keeping the NATO alliance unified. But already, sources say, there are cracks appearing in NATO — Turkey is refusing to allow Sweden and Finland to move forward with joining the bloc, and diplomats had to carve out an exception for Hungary as part of Europe’s recent oil embargo against Russia.
There’s also the challenge of maintaining domestic support for funding Ukraine’s war. There’s been growing opposition among Donald Trump-aligned Republicans with each assistance vote that Congress has taken, one Democratic lawmaker noted.
He added that there are concerns over how willing Congress will be in the future to fund a protracted conflict.
“We have some runway between now and the end of the year,” the lawmaker said, referring to the $40 billion Ukrainian assistance package Biden signed into law last month.
Another top priority will be to continue to procure enough sophisticated weaponry to feed a high-attrition, artillery-heavy war without depleting US stockpiles.
One option under consideration is to restart production lines for Soviet-era systems that the Ukrainians already know how to use. But the US also wants to transition Ukraine to NATO-compliant weapons systems, which are easier to produce and procure than the older Soviet systems.
But even that comes with its own long-term challenge: Ukraine’s military will need more training to operate the western systems.
Still, US officials have pointed to the more advanced weapons already on the battlefield, like the howitzers, that have helped Ukraine significantly to stop Russia’s advances.
“I think we’re not seeing the Ukrainian defenses buckle,” said Colin Kahl, the Pentagon’s undersecretary for policy. “They’re hanging on, but it is a grinding fight.”
Stoltenberg put it succinctly on Thursday. “We just have to be prepared for the long haul,” he said, “because what we see is that this war has now become a war of attrition.”
Arab Observer
 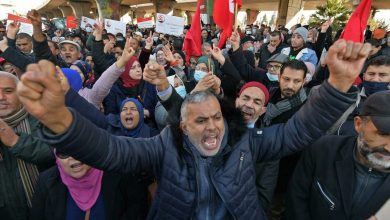 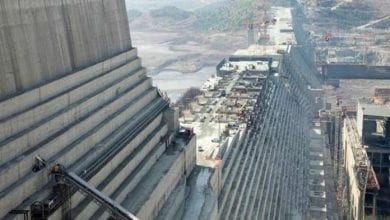 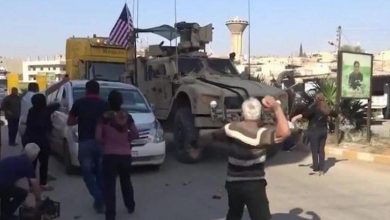 Locals of Syrian countryside prevent US convoy from entering their village 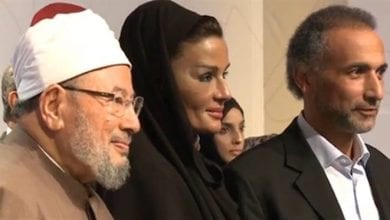