Lebanese Protesters blocked several main roads across Lebanon on Friday as unprecedented demonstrations against a political elite accused of corruption and incompetence entered their fourth month.

The protest movement rocking Lebanon since October 17 has resurged this week, over delays in forming a new cabinet to address the country’s growing economic crisis.

No progress seemed to have been made on a final lineup, which protesters demand be made up solely of independent experts and exclude traditional political parties.

“We blocked the road with cars because it’s something they can’t move,” Marwan Karam said.

The protester condemned what he regarded as efforts to form yet another government in which power is divided among the traditional parties.

“We don’t want a government of masked political figures,” the 30-year-old told AFP. “Any such government will fall. We won’t give it any chance in the street.”

Can’t pay for their daily necessities

“People are losing their jobs, they’re losing the hours they work, the currency is also in a sharp downward tilt. Prices have gone up. We’ve seen thirty-five to forty percent inflation in just the last three months. The average price of a shopping basket has gone up that much,” said Molana-Allen.

“People can’t pay for their daily necessities. Their rent, their heating, their food. And so although the protesters do want a wholesale change in the government, what they want right now is the election of a new government, they want a cabinet of specialists who can come in and fix this economic crisis. That’s now the urgent need,” Molana-Allen added.

Forming a new cabinet is often a drawn-out process in Lebanon, where a complex system seeks to maintain balance between the various political parties and a multitude of religious confessions.

Carlos Yammine, 32, said he did not want yet another “cake-sharing government”.

“What we have asked for from the start of the movement is a reduced, transitional, emergency government of independents,” he said, leaning against his car.

Demonstrators also blocked roads in second city Tripoli Friday morning, although they were cleared later in the day, local media reported. Protests also took place in the southern port city of Tyre later in the day.

On Friday evening, hundreds of protesters gathered near the parliament and outside the central bank, the target of renewed anger amid the worst economic crisis that Lebanon has experienced since its 1975-1990 civil war.

Earlier, Lebanon’s security services released most of the 100-plus protesters detained over the previous 48 hours, lawyers said.

Human Rights Watch on Friday condemned the arrests and the response of security forces to protests outside a police station on Wednesday night demanding detainees be released.

“The unacceptable level of violence against overwhelmingly peaceful protesters on January 15 calls for a swift independent and transparent investigation,” said Joe Stork, deputy Middle East director at the rights watchdog.

Over the past few months, the Lebanese pound — long pegged to the US dollar at 1,507 — has fallen in value on the unofficial market to around 2,500.

The World Bank has warned that the poverty rate in Lebanon could rise from a third to a half if the political crisis is not remedied fast. 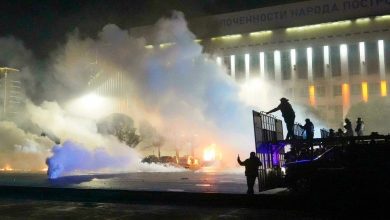